Housing and traffic are drivers of emission. Should they be subjected to emissions trading than? Or will this cut off poorer households?

The EU is well known for establishing the world’s first large greenhouse-gas emissions trading scheme – the Emission Trading System (ETS). It works on the principle of “cap and trade”: the system sets an absolute limit or “cap” on the total amount of greenhouse gases that can be emitted each year by the entities covered by the ETS. This cap is then reduced over time so that total emissions fall. It was first launched in 2005 to fight global warming and currently covers energy-intensive industrial sectors, power and heat generation, and aviation within Europe. ETS is recognised as one of the key pillars of EU energy policy.

In July 2021, the European Commission proposed a piece of legislation that sparked controversy within the EU public space – the creation of a separate ETS that will cover buildings and road transport. What is in the proposal? Why it has caused such a strong backlash and, most importantly, will it survive the political filter?

As part of the Fit for 55 legislative package (a set of 13 proposals that aim to align the EU’s key climate and energy legislation with the 55% reduction target in greenhouse-gas emissions by 2030), the Commission proposed to create a separate ETS from 2026 to cover emissions from road transport and buildings. The Commission argues that the current infrastructure covered by the ETS reduced emissions by about 35% between 2005 and 2019. However, transport and housing have lagged behind the emission-reduction goals. Therefore, it considers that the set-up of the new ETS would be an effective solution to tackle the greenhouse-gas emissions in these sectors. According to the Commission’s proposal, this selfstanding ETS would focus on fuel distribution and would cover all emissions related to fossilfuel combustion of heating in buildings and road transport (gas, diesel and petrol). In practice, it will make fuel suppliers pay a price for the carbon that their products release into the atmosphere. The purpose of this new system would be to create a price incentive for companies and consumers to switch to low-carbon solutions, while raising additional revenues to finance the energy transition.

The proposed new scheme is a complex one, because as soon as fuel suppliers are obliged to pay an extra charge for their carbon emissions, they will not hesitate to transfer those expenses directly to their consumers, which will be reflected in the final bills. To counter the possible negative social impacts, the Commission also proposed to create a new EU funding stream called the Social Climate Fund (SCF). It would be financed by the EU budget (using 25% of the expected revenues of emissions trading for building and road-transport fuels) and will provide €72.2 billion of funding to the Member States, for the period 2025-2032. Annex I of the Commission’s proposal contains the formula used to calculate the maximum financial allocation from the SCF for each EU Member State. The variables considered are: total population, population at risk of poverty living in rural areas, percentage of households at risk of poverty with arrears on their utility bills, gross national income (GNI) per capita, overall GHG emissions and CO2 emissions from fuel combustion by household. Annex II lists the maximum amount that each Member State can receive from the SCF. In absolute terms, the biggest beneficiaries will be Poland (17.6% of total SCF funding), France (11.2%), Italy (10.8%), Spain (10.5%) and Romania (9.3%). Member States should use this funding to support measures and investments intended to reduce reliance on fossil fuels. These include insulation and/or renovation of buildings, integration of renewables and development of necessary infrastructure, such as smart and intelligent refilling and charging stations for zero-emission vehicles, etc. The Social Climate Fund will finance activities that would primarily benefit vulnerable households, micro-enterprises or vulnerable transport users. Concretely, in terms of financing, the proposal includes both: compensation – meaning direct payments to vulnerable citizens – and investment in climate measures (listed above).

The key issue of the proposed ETS scheme is that it will significantly raise fuel and energy prices for households in the coming years, which would create social unrest. The main problem to address will be the impact of rising heating and transport prices on consumers, especially for low-income households. The European Trade Union Confederation (ETUC) has expressed its concerns regarding the Commission’s proposal. It highlighted that the organisation is not opposing the establishment of the new ETS. However, such mechanisms should not lead to more inequality and poverty. Some of the concerns underlined by the ETUC include: regressive distributional effects (affecting proportionally more low- and middle-income households than high-income ones), disproportionate impacts across the EU (a common carbon price will not impact citizens in the same way if they live and work in a country with high wages as those in poorer countries) and the considerable rise in energy prices, as well as insufficient funding through the Social Climate Fund proposal. Several stakeholders, including the European Climate Foundation, Friends of the Earth Europe and Carbon Market Watch, have echoed the above-mentioned concerns. The European Automobile Manufacturers’ Association (ACEA) also cautiously welcomed the new ETS for road-transport fuels and highlighted that it will increase the visibility of carbon pricing. However, ACEA pointed to challenges in reaching the proposed targets within tight deadlines, stating that these targets are not viable without significant additional efforts by all stakeholders, including Member States and relevant sectors.

The leaders of the Eastern bloc are the strongest opponents to the new emissions rules.

These aspects have also initiated a heated debate within the EU political circles. Several Member States have expressed their opinions. The leaders of the Eastern bloc are the strongest opponents to the new emissions rules. Environment ministers from Poland, Romania and Hungary underlined during the European Council meeting in December 2021 that Eastern European countries are more reliant on coal and other fossil fuels, meaning there will be a higher financial burden for them than for western European countries, which have a higher share of renewable energy sources in their energy mix. They also referred to the ongoing energy-price crisis that is fuelling their opposition. The eastern European countries are not alone in this debate. Concerns have also been expressed by the leaders of Spain, Portugal, France and Ireland – all invoking the arguments of potentially negative social consequences.

Germany, on the other hand, is among the supporters of the proposed initiative. It already has a similar national carbon-pricing system in place. In particular, the German Government argues that the ETS will cut emissions in a cost-effective way and raise funding for green investments. Austria and Sweden share the same position when it comes to the establishment of a separate ETS for housing and road transport. However, in terms of the proposed new funding stream, Sweden and Finland have expressed their concern about the idea of creating another EU fund by highlighting the risk of overspending at EU level. Meanwhile, Poland and Romania – countries listed among the largest beneficiaries (17.6% and 9.3% of total SCF funding respectively) – underlined that the proposed amount is not sufficient to cover the high social cost of the energy transition.

The proposal is currently in the hands of the European Parliament. The early draft provided by the rapporteur Peter Liese (German member of the European People’s Party political group) highlighted its alignment with the Commission’s proposal with slight modifications. He proposes to impose the scheme one year earlier, i.e. in 2025. In anticipation of criticism, Peter Liese wants to give Member States the option of an opt-out for private transport and private buildings, meaning that Member States can choose to include fuels for private road transport and residential-building heating and cooling into the new ETS two years later (in 2027). This move could be seen as a compromise proposal that aims to convince the opponents of the ETS worried about the social impact.

Moreover, the co-rapporteur of the file in the European Parliament’s Committee for Environment, Public Health and Food Safety (ENVI), Esther De Lange, drafted a definition of both energy and transport poverty. Currently, there is no standard Union-level definition of energy poverty. Therefore, Amendment 22 defines it as: “poverty affecting households in the lowest income deciles whose energy costs exceed twice the median ratio between energy costs and disposable income after deduction of housing costs”. It also proposed to link the access to the SCF funding with the rule of law, which could be challenging particularly for Poland and Hungary due to their stance on this matter. To become law, these amendments will have to pass the plenary vote in the European Parliament and the final negotiations at a European Council level.

In the following months, the rapporteur Peter Liese will collect the positions of political groups, Members of the Parliament and other stakeholders to include these in the final report. The Parliament aims to finish its amendments by summer 2022 and hopes to create a strong foundation for a political majority. After that, it will officially start the negotiations with EU national governments, within the framework of the European Council, to agree on the final rules.

Transport and buildings remain the two hardest sectors to tackle emissions within the EU. Nevertheless, the proposed approach by the Commission has shown that it is not sufficient for building a solid political endorsement. Lawmakers in the European Parliament even suggested that the Commission’s proposal should delay the introduction of carbon pricing on transport and buildings by two years, giving policymakers more time to find better solutions. Considering the ongoing and rather stormy political negotiations, the proposal will probably either be delayed or suffer considerable modifications. The final outcome of this initiative is yet to be defined. 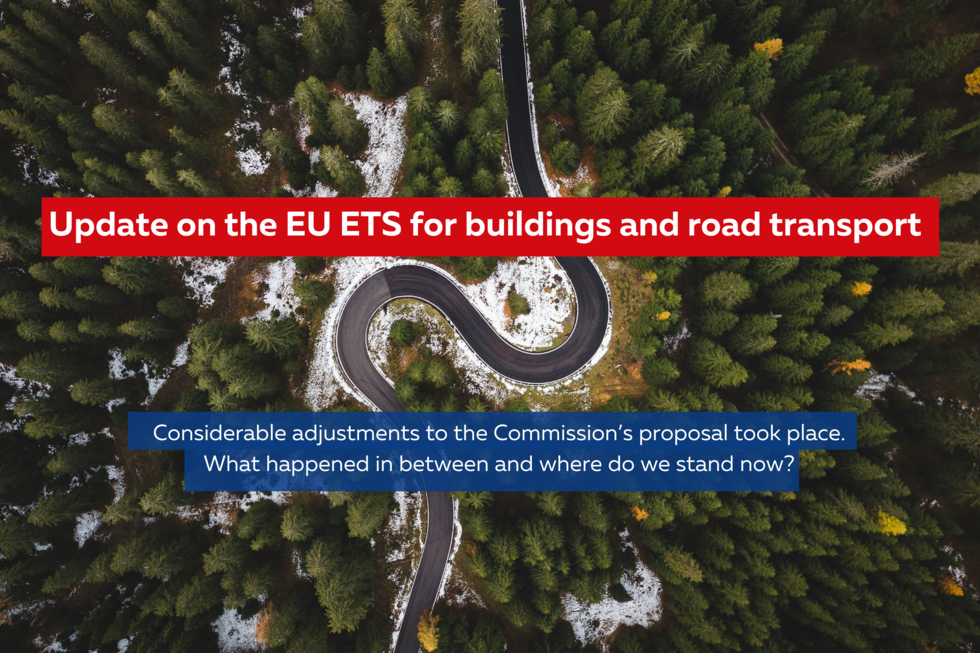 Update on the EU ETS for buildings and road transport 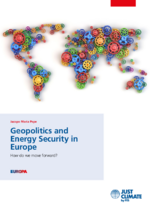 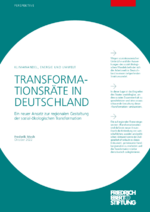 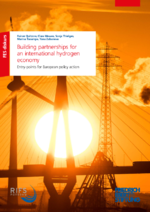 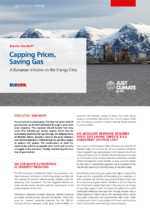 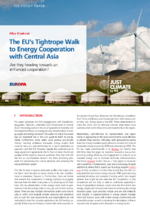